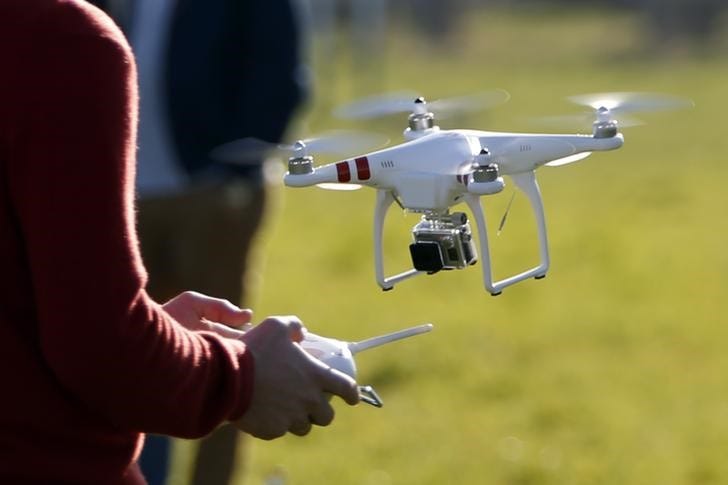 No private pilot license, no aircraft certification, no medical exam. That's the bottom line from the proposed rules for small unmanned aircraft systems, released today by the Federal Aviation Administration.

The Notice for Proposed Rulemaking (NPRM) for small UAS represents a significant departure from how drone flights have been authorized in the past. Currently, the easiest path towards authorized commercial flight in the United States is the "333 exemption" process, in which the FAA can grant drone operations on a case-by-case basis.

But that process is onerous for many drone fliers, journalists especially. The 333 exemptions granted thus far typically only allow flights within "sterilized sets," which is antithetical to journalism. The exemptions also require the drone operators to hold private pilot licenses, which take months of training and thousands of dollars to achieve.

All that could be a thing of the past, if the small UAS NPRM becomes regulation. The proposed rules do not require a pilot license to operate small UAS. Instead, UAS operators will need an unmanned aircraft operator's certificate, which can be granted after the completion of an aeronautical knowledge test.

The rules to not go on to describe the content of the knowledge test, but in a telephone conference today, FAA Administrator Michael Huerta said the exam would acknowledge that flying a small UAS is "fundamentally different" than manned aircraft. The test would need to be re-taken every 24 months.

According to the NPRM, small UAS would not need airworthiness certification, but operators are expected to inspect their aircraft before each flight and keep their drones in a "condition safe for operation." Drones will require markings in the largest size that the aircraft can accommodate.

Drones under these proposed rules must not weigh more than 55 pounds, which covers aircraft as small as the popular DJI Phantom, to hexcopters and octocopters, all the way up to aircraft like the Genii hydrogen-powered UAS.

As far as actual operations are concerned, there is no mention of "sterile sets." The NPRM does not require visual observers, either. It does forbid FPV flight, and requires that operators keep their drones within visual line of sight (VLOS). A minimum of 3 miles of visibility is required in order to fly.

Drones must not fly more than 500 feet above ground level (AGL), must not exceed a speed of 100 miles per hour. UAS must yield right-of-way to manned aircraft at all times.

Altogether, the NPRM paints a rosy picture for drone journalism in the United States. But that doesn't mean it's all blue skies for journalists.

For example, there still is the matter of Temporary Flight Restrictions, which before have been used to block journalists from access to the skies when it would have been critical to reporting on important events.

The rules also would not affect the relationship between police officers on the ground, and the journalists who wish to use drones in their reporting.

And finally, the rules won't put an end to numerous anti-drone laws and ordinances at the state and local levels. In Texas, it still is a class C misdemeanor to take photos of a person or private property from a drone, with the "intent to conduct surveillance." Meanwhile, Oklahoma is considering a bill that would grant immunity to property owners who would destroy drones belonging to others. The bill, SB 492, passed the state's judiciary committee on Tuesday.

Drone journalists, like all other journalists, still may have many obstacles ahead of them. This NPRM is one step, but it happens to be a fairly important step.

This small UAS NPRM is five years in the making. Rulemaking was initiated in July 2009, and the FAA was legally obligated to promulgate final rules in August 2014. There still appears to be some waiting ahead for US drone operators.

The FAA hasn't mentioned the length of time it will be taking comments on these rules, but the process could take months. FAA Administrator Huerta told reporters he was expecting many comments on NPRM, given that his agency provided a "very comprehensive framework" on which to comment. He hopes to move forward with rulemaking "expeditiously."

Drone journalism has been hobbling along in the United States for some time, mostly thanks to hobbyists and researchers, but it will be a while longer before it can fully spread its wings.

Category : News
PreviousDoing drone journalism in Texas? You could be fined $10,000 or more.
NextFlights beyond visual range still unresolved in US, PSDJ urged rulemaking committee to reccommend sensible regulations